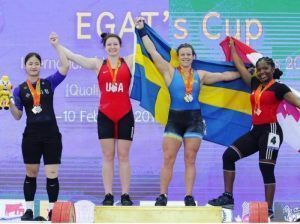 When I found out I was travelling to compete in Chiang Mai, Thailand I was thrilled. I love travelling to exotic countries and lifting against competitors from all over the world. As the time was drawing near, I was becoming anxious and excited. I was putting everything into my training; I was going all out (BEAST MODE). The travel time was over 24 hours long with three flights in total; the farthest distance I have ever travelled…boy that was draining.

Competition day while warming up with snatch, I felt good, not my best, but strong; I had no doubt in my abilities. I pushed all negative thoughts out my mind because I had one thing on my mind and that was the podium. The competition was tight, so I knew I had to fight, but I also knew that I was going to medal. I had to.

When the snatch session was over, a man with a clipboard approached my dad/coach, Clance Laylor, and told him that I had won a bronze medal in the snatch. I was ecstatic! My first international medal! But I couldn’t get too distracted, the work’s not over yet. Had to refocus for clean and jerk. My last lift in the back was 115kg/253lbs, strong and powerful. I was ready. First attempt…missed the clean! I couldn’t believe it. I was thinking “not again”, because I had missed my opener in snatch as well. “COME ON MAYA! It’s just nerves…SHAKE IT OFF! You’ve done this many times in the gym.” Second attempt was shaky, but got it! “PHEW!” I thought to myself, on to the next one. The 120kg/264lbs clean was faster than my last lift. I had it on my shoulders and relaxed a little because I knew that the jerk was my strength; BIG mistake. I pushed it up with everything I had, next thing I knew my left elbow buckled and the weight dropped behind me! NOOO! That’ll teach me to NEVER relax even for a minute during a lift. I’d just lost second place medals in clean and jerk and total. But, I couldn’t be too disappointed because I had still secured third place. Considering the longest distance I ever travelled in my life, the 12-hour time difference and struggling with the limited food options, I did pretty well!

I had a permanent smile the entire time I was standing on the podium. I thought about the endless hours of grueling training, the blood, the sweat, the tears, the ups and the downs and about how it was ALL worth it because of this moment. Fighting back tears as the flags were raised and seeing the Canadian flag, knowing I was the reason it was up there. That just solidified my dream to compete in the Olympics.