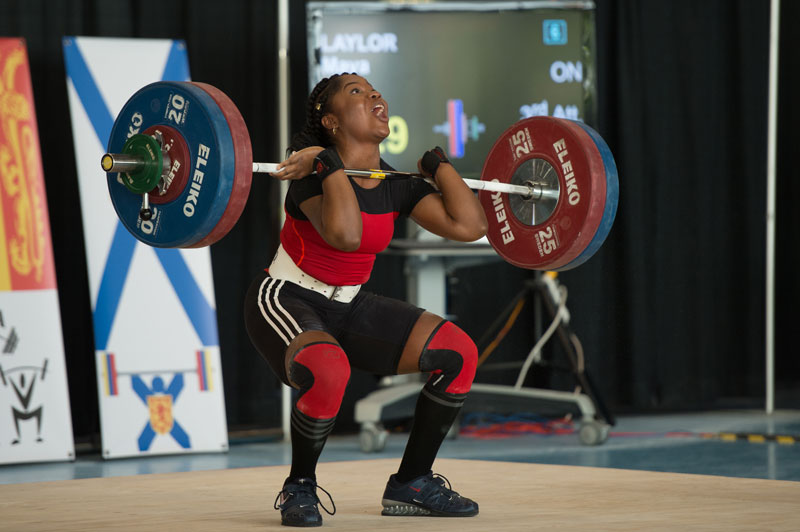 The week before the Las Vegas International Open, my weight and my lifts were on point, way better than for the Thailand competition the previous month. So I was as ready as I would ever be. It was Wednesday and my weight was 72.kg, just one kilo to lose “I got this” I thought to myself. I had a class that evening and wondered what I should carry to eat while in class. I wasn’t hungry so I just figured I’d eat at home after class. However, during my break I was ravenous, so I decided to have a slice at Pizza Pizza. It wouldn’t hurt, I’d been eating healthy all day, a slice wouldn’t kill me…boy was I wrong.

The next morning I step on the scale and see 73kg, I had gained a whole kilo! What have I done! I was travelling to Las Vegas that same day and I knew that I’d have water retention because of the flight! I had barely eaten anything most of the day …I WAS STARVING. When I arrived at the hotel I weighed myself again and I saw 73.5kg!  I was stressing because I only had one day before I had to compete. The next morning I see 72.8, by this time I couldn’t keep this in anymore. I told my dad that I needed to go to the sauna because I need to lose 2kg. He kept it cool but I knew he was stressing inside because losing that much weight quickly decreases strength. The day went by and I had been to the sauna twice. Surprisingly, many female lifters were there as well; I’d thought that I was going to be the only one! I got to know a girl from Miami who was to lift later that day! That was a huge shock to me.

By the end of the day I was 71.4kg, and I knew for a fact I would be right on the money the next day. The day finally came, competition day. While warming up in the back, I was moving fast and feeling strong. I opened with a strong 94kg/206lb snatch, but missed my last two attempts. Highly annoyed and irritated I tried not to dwell over the missed attempts because I had clean and jerk to focus on. During my last snatch I felt my right elbow over extend trying to secure it in the bottom position, so coach Greg Chin massaged a join/muscle cream to ease the pain. Still feeling it, I used tiger balm that I carry with me everywhere (my mom’s favorite smell…NOT). Trying not to allow this new issue to interfere with me mentally, I told myself “I’m good, nothing’s wrong”.

I opened with a light clean and jerk just to secure my total. Coach Greg asked what I wanted next? I said 120kg! He was pumped and so was I! Knowing this would place me in first, I went into beast mode. I put my all into that lift; I can’t have what happened in Thailand happen again here, no way! That lift still haunts me to this day. So I go for the 120kg C&J and accomplished it which put me in first place!

Standing on two international podiums in 2 months…not bad Maya! Experiencing the challenges of weight management, long flights and time zone adjustments was a hell to get through, but I came out on top. I have never been more proud of myself! This just reminds me that no matter what challenge life throws at me, I can overcome.